Mr Yasuhiro Yamauchi, Cultural Attaché, Embassy of Japan ,
Mr. Gerry Doyle, Chairman, Judo Ireland and Ms. Marie Cloonan, National Executive, PEAI, watched on as the students display some of the techniques they learned during the course, before presenting them with their certificates.

Special Guests Martin Savage & Paul Brady came down from Warrenpoint, Co. Down to give a fantastic display of control & technique in their demonstration of the kata.

All participants will get support in organising judo within their school’s P.E. programmes in the coming months.

Judo Ireland are now planning for a second course for September 2012. 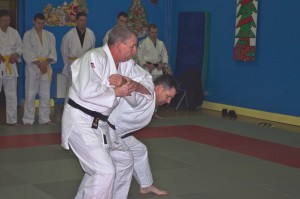